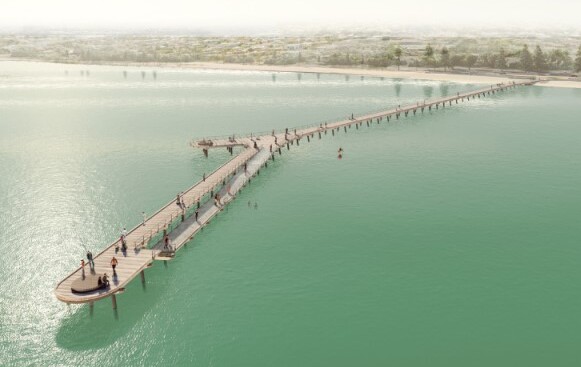 The original Altona Pier in Melbourne’s western suburbs was built around 140 years ago and is nearing the end of its design life, now posing safety risks despite significant repairs done in the 1980s.

The original pier is partially closed following storm damage in June 2021 when the landing broke away. Eventually the entire pier will be closed to allow existing timber to be assessed, salvaged and milled for reuse on the new structure.

Victoria’s Department of transport appointed JCB Architects for their design along with AW Maritime, marine engineers, and Site Office, landscape architects. Schematic designs have now been released with detailed designs due mid-year. Construction of the new Altona Pier is expected to commence late in 2022 and to be completed a year later.

The new Altona Pier will be wide enough for emergency vehicles to turn around at its head and will include lighting and an accessible lower landing for swimming and boating.

Redevelopment of the Altona Pier is one of five major pier redevelopment projects by the Victoria Government that include Rye Pier, Portarlington Pier, St Kilda Pier and Flinders Pier.