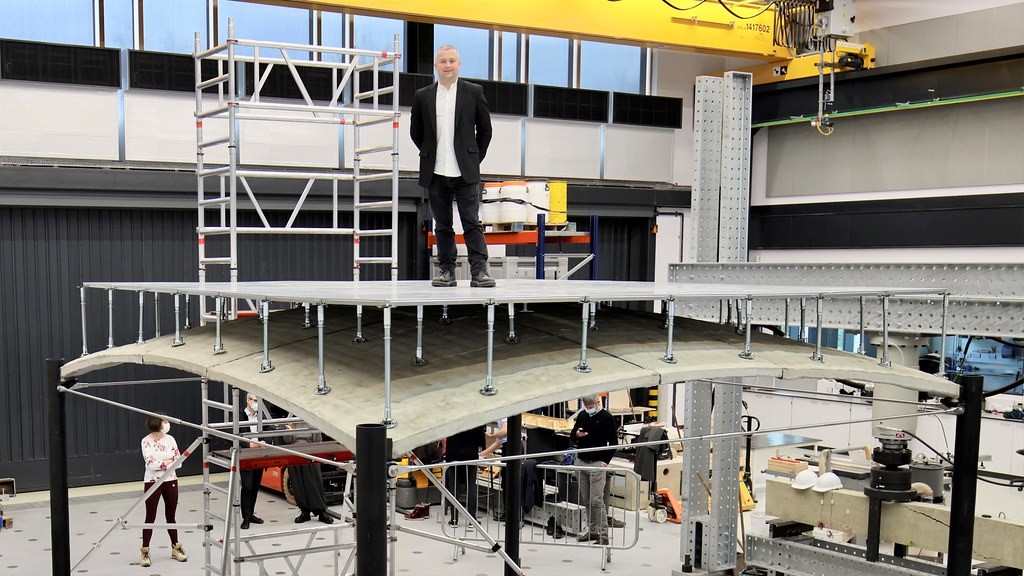 A new prefabricated vaulted style of floor uses 75% less concrete than a traditional flat slab floor and reduces carbon by 60% in construction, according to its developers.

The curved vault-shaped structure is covered by standard raised floor panels to create a level surface. A full-scale demonstration of the thin-shell floor prototype has been revealed, which uses 60% less carbon than an equivalent flat slab that could carry the same load.

An interdisciplinary research team from the UK universities of Bath, Cambridge and Dundee is working on the ACORN (Automating Concrete Construction) project. The team of structural engineers, manufacturing experts, and mathematicians has demonstrated that the innovative vault-shaped floor design takes advantage of concrete’s inherent natural properties and strengths.

Dr Paul Shepherd from the University of Bath’s Department of Architecture & Civil Engineering is the Principal Investigator for ACORN. He says by putting the material only where it is needed, and making sure it works in compression, the design uses far less concrete.

Currently, most building floors use thick flat slabs of solid concrete, which he says are inefficient since they rely on the bending strength of concrete to support loads. And concrete requires a lot of steel reinforcement to resist tension induced by bending.

ACORN’s approach is to use concrete for what it is good at – resisting compression. The new shape might prove impractical to make using traditional temporary formwork, so the ACORN team has also developed an automated adaptable mould and a robotic concrete spraying system that can be used in off-site.

Alongside this new type of fabrication, the team has also developed bespoke software to optimise floors for a given building design and control the automated manufacturing system to produce them Since the floor is made off-site, it also needs to be split into pieces, transported to site and then assembled so Shepherd’s team developed a connection system to join the pieces together. This brought advantages in terms of reducing time needed on-site for construction.

The ACORN researchers were also able to incorporate reversible joints, so that the floor can be disassembled and reused elsewhere at the end of the building’s life, promoting a circular economy for the construction industry. Early results suggesting that ACORN’s approach of using material sparingly can already deliver significant carbon savings.

Despite being the first of its kind, each piece took only half an hour to make, and the whole floor took a week to assemble, the team revealed. Future commercial versions could be manufactured in dedicated industrial facilities much more quickly, and site erection times much reduced.