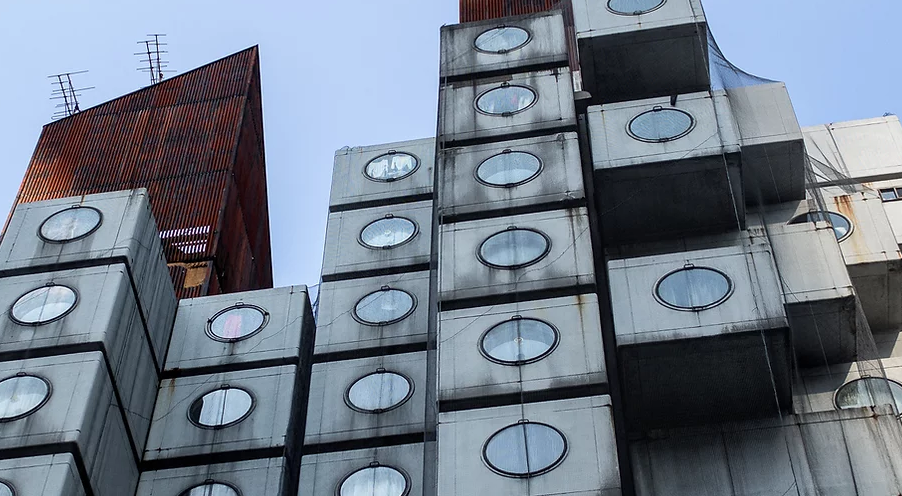 Demolition day has arrived for Tokyo’s iconic tower block, the concrete and steel structure having made it to 50 years of age this year despite falling into disrepair.

The Nakagin Capsule Tower, the first example of capsule architecture in the Japanese Metabolism Movement style and prefabrication was completed in 1972 for businessmen saying in the city after work. The building eventually became home over the decades to a mixed use of residences, design spaces and offices.

Architect Kisho Kurokawa imagined a futuristic world where work would be carried out anywhere that is only now being realised. Made up of two interconnected towers of 11 and 13 floors, the structure housed 144 steel truss boxes of 10 sqm each dominated by a large round window at one end.

The building was constructed both on- and off-site. The two concrete towers were built on-site along with their energy supply systems. Off-site, the capsules were prefabricated and assembled at a factory. They were fitted with utilities and their interior fittings prior to shipping to the site where they were attached to the towers, cantilevered from the shaft.

The building has been earmarked for demolition for more than a decade as replacing individual pods, as per its design, became impossible. It had fallen into disrepair, with the pandemic sounding the final death nell as owners sold up. But it’s not quite the end for the Nagakin Capsule Tower. It is being ‘unpacked’ this week and its capsules will be distributed throughout the world in museums and the like.